Warner’s Best Relax tincture is a 1:1 ratio of CBD and CBG fortified with terpenes.

Each serving delivers 33 mg of both CBD and CBG.

MADE IN USA: Warner’s Best new revolutionary blend of cannabinoids that focuses on more energy, alertness and focus. Sometimes, when consumers use other products for energy like energy drinks or coffee, they experience jitters, sweat and all kinds of other side effects. With Relax 1:1 CBG Oil, you’re harnessing the power of the hemp plant’s natural CBG cannabinoid to give you a quick boost in energy and focus.. In addition to all of that, we have researched specific terpenes that have properties that also contribute to alertness, energy and focus. We are confident that after you try Relax 1:1, you will feel the effects in your body in a very short amount of time and have the focus and energy you need for the day. This product is the next step in revolutionizing the CBD industry with isolated cannabinoid research and terpenes.

CBG oil is CBG, or cannabigerol, which is a non-intoxicating cannabinoid found in cannabis plants, including the hemp plants used to produce hemp oil. All strains of hemp produce the precursor of CBG, called CBGA (or cannabigerolic acid) early in their lifecycle. Over time, this acid transforms into cannabinoids, including CBD, CBC, THC, a small amount of CBG, and many more, leaving behind only trace amounts of CBGA. Because of the low levels of CBG found in most strains, CBG is considered a minor cannabinoid. Some strains of hemp have been bred to produce high levels of CBG from the CBGA produced early in the plant’s lifecycle, forgoing the production of the other cannabinoids. As with CBD and THC, CBG interacts with the CB1 and CB2 cannabinoid receptors found throughout the body. 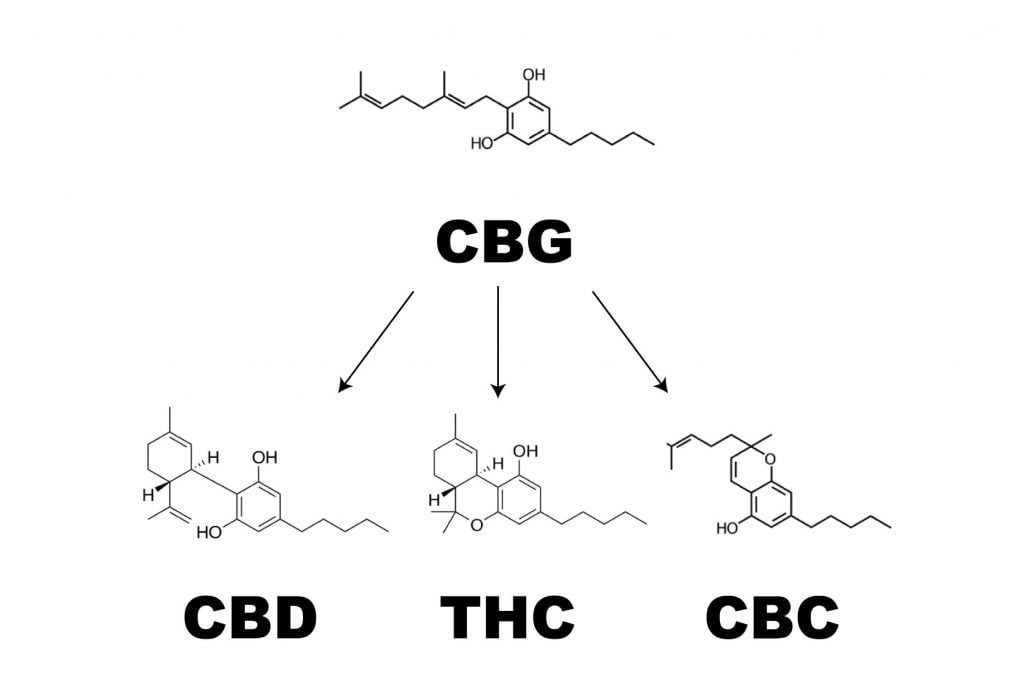 How is CBG Oil Made?

Cannabis plants, including the hemp plants used to produce hemp oil, produce CBGA (cannabigerolic acid), the forerunner to the three major cannabinoid precursors: THCA (tetrahydrocannabinolic acid), CBDA (cannabidiolic acid), and CBCA (cannabichromenic acid). CBGA is broken down by enzymes in the cannabis plant and by heat and UV light to “funnel” the CBGA toward one of those three main lines. From the CBGA left over from this conversion process, a lower amount of CBG is formed via decarboxylation. Because the CBGA is transformed during these processes, very little is left behind. Some CBG strains of cannabis have been bred to produce large amounts of CBG from the cannabigerolic acid, which comes at the expense of lower levels of the other cannabinoids. Another method to preserve high CBG content in hemp oil is to perform extraction on the plants at about 6 weeks into an 8-week flowering cycle.

What is CBG Oil?

In its natural form, CBG is bound up in the hemp plant. While there are ways to use the CBG found in the plant, such as smoking or cooking with the material, those aren’t attractive options to many people. In its pure, isolated form, CBG is a powdery substance. However, CBG isolate powder lacks other health-supporting cannabinoids and terpenes, and most especially loses out on the “entourage effect.” One way to produce CBG Oil is to reconstitute the oil from CBG isolate and a carrier oil, with the option to add in other cannabinoids and terpenes to recreate the entourage effect. CBG Oil can also be produced from the aerial parts of CBG-dominant hemp strains, which naturally contain other cannabinoids (such as CBD) and terpenes found in the plant.

What Are the Benefits of CBG oil?

CBG oil is good for many things, most notably for supporting health and well being. While we are still discovering the full capabilities of CBG oil, studies are beginning to show that CBG has a similar effect on the mind as CBD oil. And while there is little evidence so far about the side effects of CBG oil, its close cannabis relatives generally contain good safety profiles for humans.

Here are some of the areas that CBG can support you in maintaining a healthy lifestyle:

While there are many studies pointing to the many health benefits of CBG oil, much is still being discovered. We definitely recommend Googling for the most up-to-date research. To summarize, the CBG cannabinoid is known particularly for its support of the digestive system and for the almost coffee-like energy and focus it gives. It’s also known for supporting healthy skin, and like CBD, CBG’s effects may also help manage everyday stress and maintain a positive mood.

How Does CBG Oil Make You Feel?

While CBG oil is not a stimulant, it does give a feeling of energy and focus that is similar to the effects of coffee. Users report being able to focus on one task for longer periods of time, with increased levels of productivity. A common use of CBG is as a pick-me-up which has a much more controllable serving size than coffee thanks to the use of a precise dropper. Overall, CBG effects on the perceptual level are more of an “upper” than a “downer.” CBG can also help your digestive system continue to feel like it’s functioning properly, as many of the cannabinoid receptors CBG interacts with are located in the digestive system. In addition, many users report mood support from consistent CBG usage.

What is the Difference Between CBD and CBG?

Cannabidiol (CBD) and Cannabigerol (CBG) are both cannabinoids found naturally in the hemp plant. They are produced at different stages of the plant’s life. As the young hemp plant grows, it begins by producing CBGA, or cannabigerolic acid, which is the precursor to all cannabinoids in the hemp plant. The process continues as CBGA is then converted via enzymes, heat, and UV light into THCA, CBDA, and CBCA. Each of these precursors undergoes chemical changes to become (respectively) THC, CBD, and CBC. From the CBGA that is left over after this process, a small amount becomes CBG. So while both CBD and CBG start out as CBGA, each cannabinoid is formed at a different stage of the hemp plant’s lifecycle.

Is CBG Available In Other Forms?

If you’d like to use CBG in a different way than our Relax 1:1 CBG Oil product, you can check out our CBG gummies.

Why buy from CBD Warner’s Best?

We are a trusted source of CBD and CBG products. We follow only the best industry standards, making our CBG oil the most effective and the highest quality on the market today.

Beyond that, every batch of our products is lab tested internally and by a third party to ensure that every product meets our strict purity and potency standards. All Warner’s Best CBD products are made with the best organic, non-GMO hemp grown in the USA.

We offer competitive pricing and have a money back guarantee policy. If not satisfied, we will refund your order within 45 days if purchased from our website by following our return process online and either returning your product(s) or supplying photographs of your product(s) to be determined once request is made. We take your privacy seriously and will take all measures to protect your personal information. Any personal information received will only be used to fill your order. We will not sell or redistribute your information to anyone.

FDA Disclaimer: Any statements made within this website have not been evaluated by the Food and Drug Administration. No products produced, manufactured, marketed, or distributed are intended to diagnose, treat, cure or prevent any disease. Consult your physician before beginning any supplements or botanical extracts. If pregnant or breast feeding, consult with your physician before use. For use by adults 18+. Keep out of reach of children.